Lost in the Fifties Tonight

In the 1950’s, all of us were still in grade school, and really were not aware of what was happening in the world around us. There were some ugly things happening back then (Emmett Till, Rosa Parks, letters from a Birmingham jail etc.) but today we remember only the good parts of that era, and the video below will remind us of “the good old days”.

So far, only Marty McFly has been able to travel back in time, but the recent presidential election is rapidly transporting us back in time to the Eisenhower years – and that’s a good thing.

While Donald Trump claimed he wanted to “Make America Great Again,” President Biden is attempting to actually do it. The former president’s slogan got Americans thinking nostalgically about the 1950s and early ’60s, when the United States dominated the world and its economy produced rising wages for workers and executives alike. A defining feature of those years was federal investment in infrastructure, scientific research and education. (Think interstate highways, NASA and the massive expansion of public universities.) By contrast, Washington in recent years has mostly spent money to fund private consumption by giving people tax cuts or transfer payments.

Biden’s infrastructure plan is the first major fiscal program in five decades that would focus once again on investment.

Biden’s plan harks back to the New Deal. During the Great Depression, the Works Progress Administration (WPA) built or improved almost 1,000 airports, creating the backbone of the modern airline industry. The president’s proposal will help create a modern electric vehicle system by funding a network of 500,000 chargers. The 1936 Rural Electrification Act brought electricity to rural areas. Biden proposes doing the same with high-speed Internet, which he argues is the equivalent in today’s economy. The New Deal was bigger (relative to the size of the economy at the time), but it is the only valid comparison with what the Biden administration is proposing.

In 1956, the highest incremental tax rate for wealthy individuals was 91%, and the highest corporate tax rate was 52%.

During the 2020 coronavirus epidemic, the U.S. economy shrank by 3.5%, and was worst than that prior to the 4th quarter, when it grew 4%. During the same time period, some companies reported huge profits.

Even since the Reagan years, some of our politicians have been under the impression that tax cuts are good for the economy.

Taken to their logical extreme, they can result in disastrous outcomes, as evidenced by the economy of Kansas under Sam Brownback.

Politics is always a dangerous sport, and can often be depressing. Fortunately, there IS a way us old guys to remember the 1950’s in a good way, and the solution is shown below: 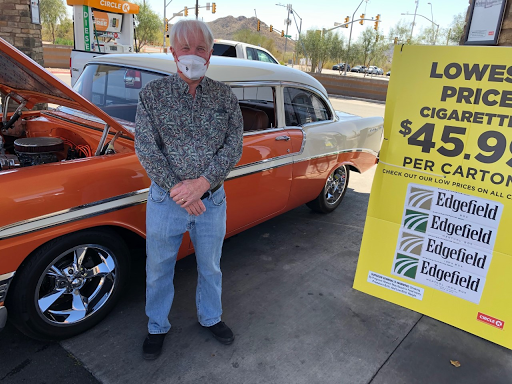 When I stopped to buy gas a couple of weeks ago, an older gentleman with a 1956 Chevrolet pulled up to the pump next to mine. The car was originally purchased new by his grandfather in 1956, and had been in the family ever since. He spent 10 years doing a “frame off” restoration, and the finished result is stunning. Although the body is still strictly stock (including the color), it has been upgraded with modern running gear and upholstery. If I had a place to garage it, and a little extra money, I would LOVE to own a car like this. For now, though, it will remain nothing more than a reminder of the good times from the 1950’s.